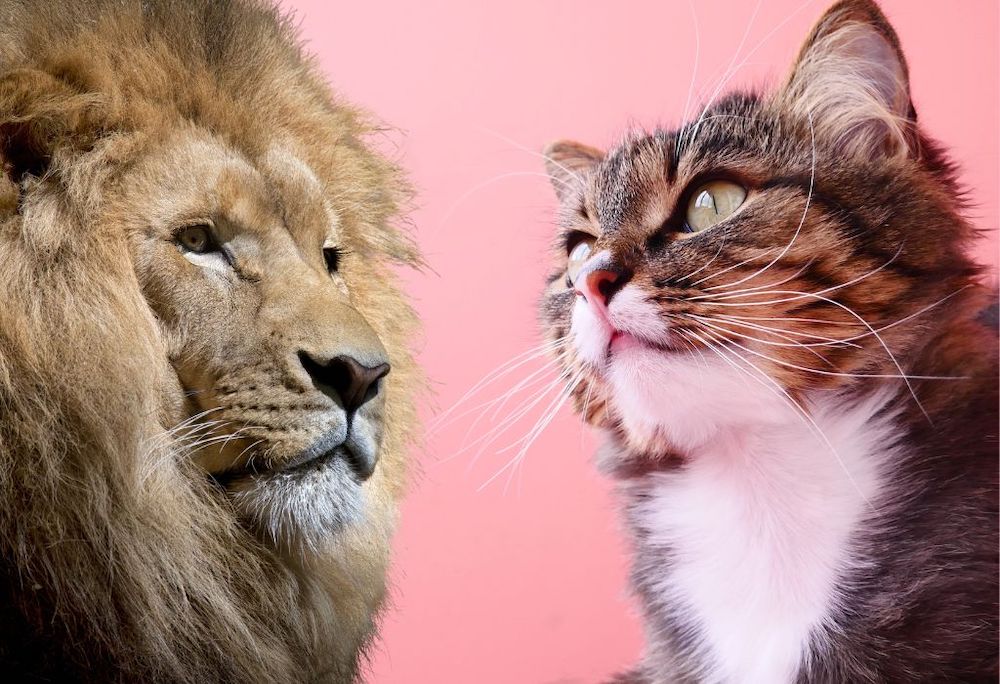 Fascinating Feline History: Where Does the Domesticated Cat Come From?

At times, your cat’s odd behavior might make you think they must be an alien from another planet. But our furry weirdos are indeed from the same world we are! Humans and domesticated cats have enjoyed a symbiotic relationship for thousands of years, but where do our fur friends originally come from? Cat in a Flat dives into the fascinating origin and history behind our kitties.

Where do cats come from?

You’ve probably noticed that there are a fair few similarities between big cats and your pet kitty. All types of felines—wild or not—love sitting in boxes, are carnivorous hunters, and enjoy climbing trees. They even have comparable snooze styles. Both large and small cats sleep a lot and share similar napping patterns! But is your tiny house tiger really descended from lions and tigers (oh, my!)?

The simple answer is: no. While your furry friend is related to lions and tigers—think of them as distant feline cousins—Mr Whiskers isn’t a direct descendent of these large cats. Domesticated cats are descended from the African Wildcat (Felis silvestris lybica), a species that is still found in Africa and Asia today.

How, when, and why cats became domesticated

How did cats become domesticated ?

Have you ever asked your fur friend to do something, only for them to completely ignore you? A quirky trait of most felines is that they refuse to take orders from, well, anyone. More likely than not, Mr Whiskers will do just as he likes when he likes. So then, how did humans manage to domesticate cats?

As would be expected in the saga of your house cat’s origins, humans didn’t domesticate cats. Cats domesticated themselves (typical, right?). Your kitty’s early ancestors simply began hanging around humans, serving as pest control and, over time, adapting to develop more docile traits.

When did domestic cats first appear?

Researchers have long struggled to pinpoint exactly when cats first became domesticated. It’s easier to pinpoint where cats come from than when they first began their unique relationship with humans. However, there are some ways to draw logical conclusions as to the origin of domestic kitties.

In 2004, scientists unearthed an ancient site in Cyprus in which a cat had been deliberately buried with a human. This helped place the timeline for domesticated felines somewhere around 1,500 years ago! If you think that’s a long time, just wait. Other scientists believe cat domestication began much earlier: some 10,000 years ago. They speculate that wild cats would have begun to interact with humans around the time agricultural societies were flourishing.

By now you probably already have a fair idea of why cats decided to domesticate themselves. It was convenient! When agricultural society took root (literally) 10,000 years ago, it introduced a whole new threat to human food sources: rodents.

People began storing food in storehouses, which attracted mice and other pests. Cats in turn were attracted to the abundance of small prey found in storehouses. Our feline friends stuck around because storehouses were a convenient, never-ending food source for them too. If we’re honest, not much has changed. One of the reasons why Mr Whiskers still chooses to hang around is because we’re the ones feeding our cats!

Which is the oldest type of domesticated cat?

Most of today’s popular cat breeds are a relatively new phenomenon. This is because it took our furry friends quite a while to decide they were domesticated enough so humans could attempt selective breeding. It wasn’t until the 19th century that breeding began to create significant changes in domestic cats. Until then, our felines were not very different from their wilder African relatives!

While it’s almost impossible to determine exactly who is the oldest type of domesticated cat, many believe it to be the Egyptian Mau. As the name suggests, Egyptian Maus were cats in Ancient Egypt. Some of them have been found mummified alongside pharaohs, and it’s believed they held an important place in Egyptian society as far back as 10,000 years ago.

Can my cat survive without me?

After reading about your kitty’s origins, you’re probably thinking our fur friends would struggle to survive these days if it weren’t for humans. This is both true and false. While it’s true that cats are more dependent on people than they were thousands of years ago, most felines would also be completely fine if humans were no longer around. Because our fur friends became domesticated rather recently, scientists say there is still very little that separates the average house cat from their wilder relatives.

However, this doesn’t mean you can just go away on a trip and leave Mr Whiskers to fend for himself. Until there’s a need for them to revert to their wild ways, our fur friends still rely on us for essential cat care. This is why it’s important to hire a great cat sitter to look after your kitty whenever you’re away from home.

Cat in a Flat offers pet sitting near you for home visits and overnight stays.

Find a Sitter Become a Sitter

Sophisticated Siamese: What You Need to Know About Siamese Cats

Who Is the Bengal Cat? Fascinating Facts About This Exotic Cat Breed

Fill in your details to join the community and book this cat sitter, or log-in .

We will let you know when a new sitter has signed up near you.